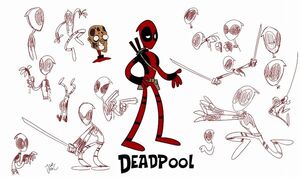 Deadpool is one of the main characters of the Marvel universe. Though he only made brief appearances in Season 1 of Bad Days, he gets a starring role in Season 2.

Deadpool was once a mercenary named Wade Winston Wilson, who often had dreams of becoming "The next great superhero". After discovering he had cancer, Wade volunteered for the Weapon X program, and went painful-but-worth-it experiments that gave him Wolverine's healing abilities (allowing him to heal from his cancer, but left him horribly scarred) and media awareness (allowing him to break the fourth wall), but drove him bat-sh*t crazy in the process. Deemed a failed experiment, Wade was sent to a facility where he was supposed to be "disposed of" but thanks to his enhanced abilities, he managed to escape along with his fellow prisoners. Donning a costume and a mask to hide his scarring, Wade took the name "Deadpool" and became a mercenary for hire, fighting the likes of the X-Men and Spider-Man, before eventually coming to friendly terms with them. He also met a rogue HYDRA agent named Bob and took him in as his sidekick.

Deadpool was first seen in the X-Men episode using his fourth wall-breaking abilities to torment Wolverine by erasing his cigar and drawing dynamite to blow him up.

Deadpool and Bob later heard about a deserted island filled with treasure. Seeing this as a opportunity to impress his lover Mistress Death (whom Thanos, the Mad Titan also appears to love), Deadpool used a pirate ship to go there. Unfortunately, they were attacked by Kraken, and Deadpool was forced to feed Bob to it. Bob managed to escape from it, but was taken away by a bird and captured by the island's natives.

Wade eventually made his way to the island, where he found a temple. Unfortunately, he found no entrance and annoyed, he used his fourth wall-shattering abilities to get the artist to draw an entrance for him. However, while getting in, Wade triggered a trap and was cut to pieces by sawblades. He eventually reassembled himself, but when Bob (who somehow escaped the natives) came to meet up with him, he triggered another trap, causing a giant monster to severely crush Deadpool. After recovering, The duo found the treasure, but discover that it belongs to Hit-Monkey. After easily stealing the treasure (because Hit-Monkey was doing his introductory dance) and taking it to the ship, Deadpool and Bob high-fived, but Bob accidentally triggered another trap and they were crushed by a boulder. Upon waking up, they discover Hit-Monkey had stolen their ship and left them in a small island. Annoyed, Deadpool jumped into the sea and attempted to swim back to the ship, leaving Bob stranded in the island.

Deadpool later got his treasure back and went to Death's house (basically an asteroid), just as Thanos was beginning to impress her. After she entered his "flying car", Wade stole Thanos' Infinity Gauntlet and used it to turn the Mad Titan into a chicken.

Deadpool is very comedic, although this appears to be caused in part by his mental illness. He is quick to act without thinking and is very impulsive. Deadpool used to present a morally grey personality, with no problem of disregarding other people. However, as an after effect of the inversion spell, Wade regained his conscience, to the point of even feeling bad for somebody being verbally abused

Deadpool took Bob in as his sidekick, but would often mistreat him at times.

Healing Factor-Deadpool possesses superhuman healing factor derived from that of the mutant Wolverine that allows him to regenerate damaged or destroyed bodily tissue with far greater speed and efficiency than an ordinary human.[1] Deadpool is able to heal from injuries such as slashes, puncture wounds, bullet wounds, beheading, and severe burns within moments. His healing factor is significantly more powerful than Wolverine's as he can regrow missing limbs and organs and was able to recover after the Hulk liquidated everything from his waist up. His head or any other limb can be reattached using this ability.[141]Even though being beheaded, Deadpool can still move his body normally.[142] Unlike Wolverine's natural healing factor, Deadpool's is mentally driven to a partial extent.