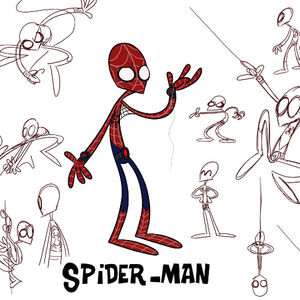 Spider-Man is one of the main characters of the Marvel universe, as well as Marvel's flagship character. He gets numerous starring roles in all 3 seasons of Bad Days.

Spider-Man was born as Peter Parker, the son of Richard and Mary Parker, who were government agents. The two left Peter in his Aunt May's and Uncle Ben's care while they went into a mission for the government, where they died in a plane crash arranged by the Red Skull (Captain America's nemesis). Peter eventually enrolled in high school where he became an honor student. Unfortunately, his unusually high intellect made him the target of much bullying. While attending a science demonstration, Peter was bitten by a radioactive spider while talking to his friend Gwen Stacy. He eventually bit the spider back, turning it into a man-spider. Afterwards, Peter discovered that the spider gave him superhuman strength, speed, reflexes, an sixth sense (dubbed the "Spider-Sense") which warned him of danger, and the ability to stick to any surface. Using his newfound powers to win a wrestling match, Peter made himself some web-shooters at home and naming himself "Spider-Man", he performed at Ed Sullivan's show. After ending his show, he refused to stop a fleeing burglar, claiming it's not his problem, but when he went home, he discovered his Uncle Ben was murdered by the same burglar. Feeling guilty, Peter learned that "with great power, comes great responsibility" and quit performing to become a crime fighter as Spider-Man.

Since he's still living with his Aunt May, it's implied that he's still in his early days.

Peter woke up one morning and accidentally shattered his alarm clock, revealing it as a daily occurrence. Dressing up as Spider-Man, Peter went to buy eggs for his Aunt May, but encountered several problems (such as getting hit by a train and failing to stop a bank robbery.). Later, he stole eggs from J. Jonah Jameson and fled, but not before his nemesis Doctor Octopus made him drop the eggs, forcing him to buy new ones. He eventually found an alien parasite known as a "symbiote" and was bonded to it, but when he discovered the parasite wanted to spray goo on his friend Mary Jane's face, he punched himself in the face to get rid of it. The symbiote later bonded to Eddie Brock, a disgraced reporter who blames Spider-Man for ruining his career, turning him into a dimwitted but otherwise dangerous version of the web-slinger as Venom. After a rough day, Peter comes back home badly injured with the eggs, only for them to fall, causing his Aunt May to slap him.

Spider-Man later makes a cameo appearance in the Avengers episode alongside Cyclops, where Nick Fury refused to let him play bowling with the Avengers because he didn't have a ticket.

After a rough day of crime-fighting, Peter went back home to sleep in his house, but discovered that his enemy Green Goblin had put a Goblin bomb on his pocket, and he was forced to throw it away into the street. After he went to sleep, Venom showed up in his house (but not before invading a neighbor's house) and tried to be friends with him, with Peter obviously refusing and having to keep him hidden from Aunt May to prevent her from discovering he's Spider-Man. Venom then stole Iron Fist's and Luke Cage's ice creams and tried to get Peter to eat them, but he instead used his web-shooters to drop them. Now angry, Venom engages Peter in a fight, with Peter attempting to shoot webs, only for his web-shooters to stop working. While trying to fix them, they went crazy, shooting endless webs into the room, pushing Venom out of the trashed house, where he goes back to his dimwitted self after some ice cream falls on top of him.

Peter and his girlfriend Gwen Stacy were having a picnic on top of the Daily Bugle building, only for Peter to hear numerous dangers with his Spider-Sense. He's forced to leave Gwen to respond to the emergencies, fighting the Rhino and Electro. After finally defeating them, Peter went back to the rooftop, only to realize Gwen was a picnic with Venom, much to his annoyance. Venom then greeted Peter, but accidentally pushed Gwen off the roof. Peter manages to stop her fall with his web, but accidentally snaps her neck in the process. Luckily, she survives, but Peter has to pay a very expensive hospital bill, causing him to cry like a baby.

In the comics, Spider-Man is commonly seen as a brave and righteous hero with an indomitable sense of justice and responsibility. Shaken by his uncle's tragic death, Spider-Man's vow of responsibility has led him to a path of heroism and humanitarian service. One of his most prominent traits is his sense of humor and he is seen as the class clown in every group he is in. Even in the face of certain death, Spider-Man invariably cracks a joke, to the annoyance of both friends and foes.

Other characters that know this character are...