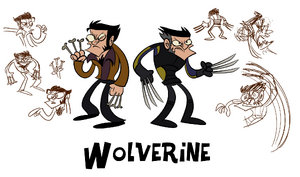 Wolverine is a major Marvel character that appeared in all 3 Seasons of Bad Days.

James Howlett was born in Canada during the late 1880s to rich farm owners. After accidentally killing his real father with his new-bone-like claw powers, James fled and adopted the new name of "Logan", and joined both first and second World Wars.

Logan would later be captured and experimented by the Weapon X program, which upgraded his bone claws into Adamantium, a nearly indestructible metal. He escaped with the help of Heather Hudson AKA Vindicator, (a member of Alpha Flight) and became the Wolverine, one of Canada's first superheroes.

Wolverine was first seen interrupting a game of chess between Professor X and Magneto, who responded by using his powers to tie him into a knot. Angry, Logan raised his middle claw at him.

Later, Logan was seen relaxing in an rock while smoking. However, Deadpool showed up and used his fourth wall-shattering abilities to turn his cigar into dynamite, blowing Logan up. Deadpool then kissed him.

Wolverine is a gruff loner who had a strong sense of personal honor. He also had a wild, animal-like nature to him and a savage, or "berserker," rage which he tried to control. He is also perfectly at home in the wilderness. He is known as one of the most fearless, brave, and dangerous men in the world, stated by Steve Rogers. Wolverine had established himself quickly as the X-Man most willing to permanently deal with their adversaries. He developed close friendships with his teammates Nightcrawler, whose personality diametrically opposed Wolverine's, and Colossus, who often performed the "fastball special" with him.

Logan First appeared in the X-men episode,where Magneto uses his magnetic powers to control Wolverine's body when his smoking starts ruining a game of chess between him and Professor X,where Wolvie flips the bird with his claws.

"Here's a thing this character said!"

Wolverine has the mutant ability to heal from anything, and has bone-like claws which were upgraded into Adamantium claws thanks to the Weapon X program. He's also an expert tracker.

Wolverine has a cigar in his crib In the "Days of the future past" episode, which means that he has been smoking since his early years.